Thanks to www.classic-car-history.com for this article. 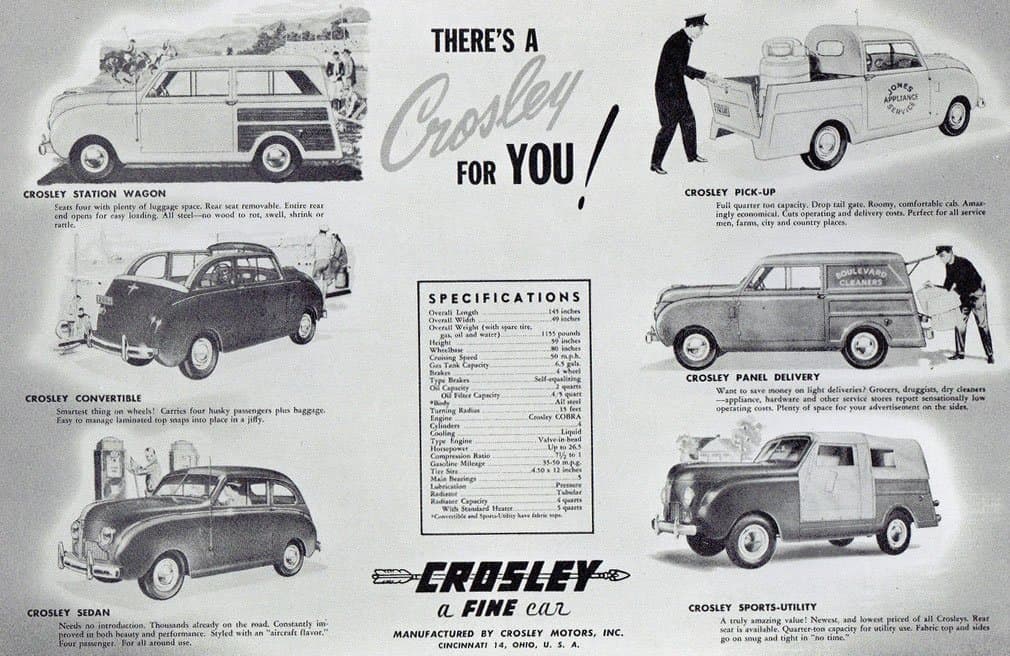 By 1939, industrialist Powel Crosley, Jr. had already made a fortune as a radio and appliance manufacturer. He also had a passion for cars, and believed that America was ready for a small economy car. With the assistance of his younger brother Lewis, he incorporated Crosley Motors and began assembling his tiny, no-frills cars in Richmond, Indiana. A second factory in Marion, Indiana soon followed.

Part of Crosley’s plan was to sell his small cars in department stores that also sold his radios and refrigerators. The design made the car narrow enough (48″ width) to be moved through a standard commercial store door, and small enough to be worked on in back rooms. Indeed, most of the car’s sales came Crosley appliance stores.

The first of the Crosley cars was a two-door convertible, riding on an 80-inch wheelbase and weighing less than 1,000 pounds. The chassis had half-elliptic springs with a beam axle in front and quarter-elliptic springs in the rear. Under the hood, along with the battery and four-gallon gas tank, sat a tiny two-cylinder engine.

The original Crosley engine was manufactured by Waukesha Engines, called the Model 150 Cub Twin. With a fan as an integral part of the flywheel, the air-cooled 580cc L-head twin-cylinder engine connected to a three-speed manual transmission, then linked directly to the rear axle via a torque tube. While this design was simple and eliminated the need for universal-joints, it proved to be unreliable, and conventional joints were fitted beginning in 1941. The Waukesha 150 Twin engine was found in Crosley cars from 1939 through 1942.

Crosley cars originally had mechanical brakes operating all four wheels. It was an unique design, in that the lining floated free between the shoes and the drum. In 1940, the brake shoes were updated with riveted linings. 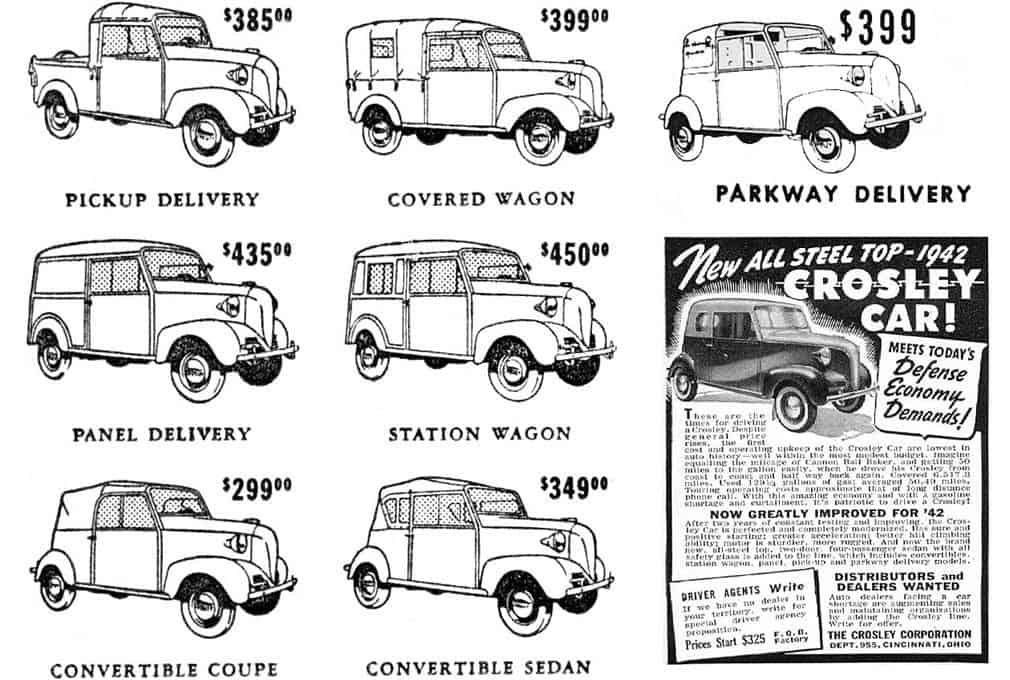 Inside, the Crosley cars came equipped with a 60-mph speedometer, ammeter, oil pressure gauge, and a hand-cranked windshield wiper. There was no gas gauge. The windows slid open for ventilation and to allow hand-signaling. A rear seat was optional.

For 1941, several new body styles were introduced, including both two-door and four-door convertibles, a station wagon, a pickup, and a convertible sedan (this featured windows for the rear seat passengers). The Convertible Coupe and Convertible Sedan would become the two most popular models.  Also new for 1941 was the Parkway Delivery, a mini-panel truck with no roof over the front seat. The new Covered Wagon model was a convertible pickup truck with a removable back seat. With the top in place, the Covered Wagon functioned as a car, and with the top down and the rear seat removed it became a 1/4-ton pickup truck.

Crosley was the last company to cease production of civilian vehicles in 1942, partly because the War Production Board was unsure how to best use Crosley’s small factories. The Richmond facility was sold during the war years. During World War II, Crosley’s little cars became more attractive to buyers simply because of gasoline rationing. 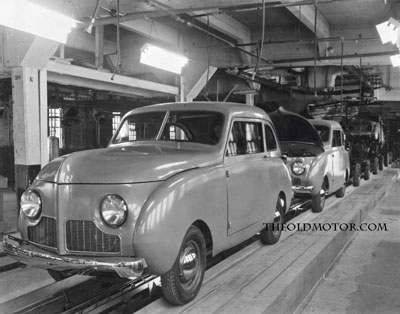 Crosley Motors, Inc. resumed production in 1946. A new, larger CC model featured a body designed by Sundberg and Ferar, a company who designed products such as home appliances, automotive and medical products, industrial equipment, vending machines and others. Headlights were now recessed into the front fenders. Although produced in mid 1946 they were referred to as 1947 models. Production of the CC model ran through 1948.

The post-war Crosley models were powered by an innovative four-cylinder, overhead-camshaft engine, originally designed by Lloyd M. Taylor during WW2 to run generators. Instead of being cast as most other engine blocks were, it was built up from an assembly of steel tubing and stampings. These parts were assembled in a jig, then copper brazed together at high temperatures. The copper brazing process gave the engine name, CoBra.

With a 2.5″ bore and 2.25″ stroke, engine displacement was 724cc, or 44 cubic inches. A vertical shaft with bevel gears was used to drive the overhead camshaft instead of a more conventional chain drive so that the lubricating oil could be fed up through it to pressure feed the cam bearings. The CoBra engine had a compression ratio of 7.5:1 making 26 horsepower at 5200 RPM. Even though Crosley cars had an all-new body and a new engine, most of the rest of the chassis and brakes were left over from prewar production. 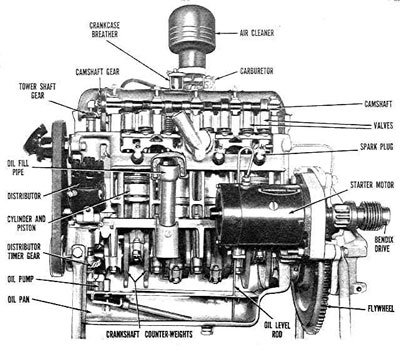 The CoBra engine was prone to rust in the water jackets when used with regular water and antifreeze, and also prone to damage from overheating. This wasn’t a problem with military mechanics trained to prevent these issues, but became a problem once the engine made it into the general public. By 1949, these issues became large enough for Crosley to redesign the engine in cast iron, replacing the CoBra with a cast-iron block, which would power all Crosley cars through the end of production.

In 1949, the Cobra engine was replaced by the new and more reliable CIBA (Cast Iron Block Assembly), a water-cooled inline-four cylinder engine utilizing five main bearings. Displacement was 44 cubic-inches, or 724cc. The CIBA engine came standard on the HotShot and retrofitted the engine to many other cars. Cobra engine owners could retrofit CIBA units for $89 with exchange.

For 1947, Crosley Motors added a two-door station wagon to the line-up. Sales increased to 19,000 units, but much of that can be attributed to the overall new car shortage. Crosley was hoping for 80,000 sales in 1948, but sold about 25,000 cars, which would prove to be their best year. Most popular was the station wagon. Roll-up windows and electric wipers became options in 1949.

From mid 1949 to mid 1950, all Crosleys used airplane-type brakes on all four wheels, but they would be short-lived. The alloy material was found to rust, which was not a problem on airplanes, but was a problem in parts of the country that used salt on roads.

In a departure from the company’s history of building bare-bones economy cars, Crosley Motors introduced the HotShot sports car in 1949. The door-less roadster had a dropped frame for a lower center of gravity, with semi-elliptic/coil springs up front and quarter-elliptic on the rear wheels for better handling. At the corners were 12″ x 4.5″ tires. The small two-seater had bug-eye headlights and no trunk, with the spare tire mounted above the back bumper.

The Crosley HotShot rode on an 85-inch-wheelbase chassis, which was five inches longer than the other Crosley cars. Weighing 1,300 pounds stock, it only took a few minutes to strip the car down by removing the top, spare tire, bumpers, doors, headlights, and windshield. This would remove over 100 pounds of weight from the car, and help it achieve speeds of 80+ mph. The HotShot proved very competitive in road racing. They were minimal sports cars that provided a lot of fun for little money.

Throughout the early fifties, HotShots dominated 750cc sports car racing, winning 10 out of 12 SCCA west-coast races alone. A HotShot also won the 1950 Sebring endurance race, an event that used a formula to measure cars against each other based on engine displacement. After six hours of racing, a Crosley HotShot finished ahead of others in its class with an average speed of 52 mph.

A deluxe version of the HotShot called the Super was introduced in 1950, featuring real doors that opened on hinges, and a top that folded down instead of having to be dismantled and stowed. In 1951, drum brakes replaced the problematic disc brakes, but provided little boost in sales. The Super HotShots were renamed Super Sports for 1951 and 1952. 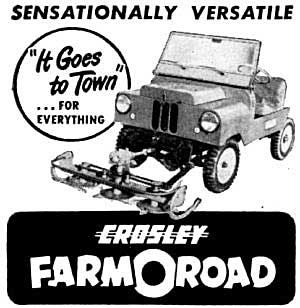 Decades before the John Deere Gator and other UTVs, the Crosley Farm-O-Road was offered as a small, dual-purpose vehicle. Based on the original Jeep, options included dual rear wheels, a pickup bed which could come with a hydraulic dump, a rear seat, a top, and side window curtains. It had 2 gear ranges with six forward speeds and could pull farm implements. Attachments included such items as a plow, a sickle bar mower, and a reel mower. Optional front and rear power takeoffs could handle a number of tools.

The Crosley Farm O Road had a 63″ wheelbase and an overall length of 91.5 inches. After it had done your farming, you could take off the dual wheels and drive it into town. The Farm-O-Road went into production in mid 1950 and offered until 1952. About 600 units were built during that time. 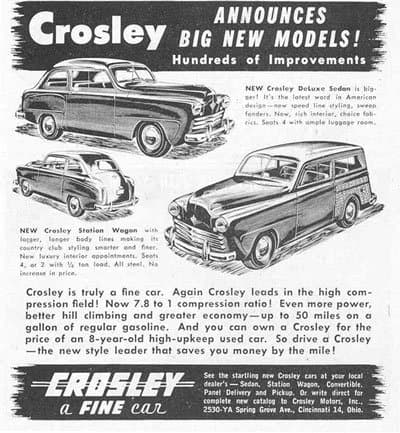 For 1950, the Crosley line-up included the Standard, Hot Shot, Super, and Farm-O-Road. Total sales of all vehicles was under 7,000. Addressing owners complaints about squealing brakes, Crosley Motors discontinued the disc brakes in favor of 9″ hydraulic drums in 1951. Sales for 1951 to 6,600. In 1952, with less than 2,000 vehicles sold for the year, Crosley Motors production ended in July.

Post WW2 was not a good time to offer small cars in a nation enjoying cheap gas and high speed. The “bigger is better” attitude prevailed through most of the 1950s. Crosley cars did have several automotive firsts, including the first mass-market single overhead camshaft (SOHC) engine, and the first American car manufacturer to use modern disc brakes. Over the 14 years of production, Crosley Motors sold 24,871 vehicles. Less than 6,000 pre-war vehicles were built.

Because the Crosley engines had served as motors for refrigeration units on big semi-trucks, there was a decent availability of parts, so Crosley-engined racers remained in competition for many years after production ended.

In 1959, a revamped version of the Crosley Farm-O-Road was produced by Crofton Marine Engine Co. as the Crofton Bug. Crofton made several modifications to expand it’s usefulness, but all parts still interchanged with Crosleys. From 1959 through 1962, approximately 200 to 250 Crofton Bugs were made, with a few selling in 1963.

While the Crosley cars were not a financial success, they were pioneers for smaller cars in the North American market. Production of the Nash Metropolitan began in October 1953, with the first shipment of cars arriving to the U.S. several months later. By the late fifties, Volkswagen Beetle sales were slowly rising.

We use cookies to ensure that we give you the best experience on our website. If you continue to use this site we will assume that you are happy with it.OK